A game a week

As part of my development as a programmer and a game developer, I'm going to begin making a game per week to practice and test out various gameplay ideas. I won't limit myself to any particular game engine. But I will commit to making a game per week for a while to increase my competence and skill as an indie developer. I've done something similar in the past when I was floundering a bit as a drawer trying to figure out how to become a painter/digital painter. I had a very tentative approach and I noodled my ideas to death. I was afraid to make big choices for fear of messing things up. As a result, I would not be able to move my work forward beyond a certain point. The answer was to do a new digital painting everyday. I kept it up for a few months and my growth was pretty remarkable. I painted something new daily and posted it online whether I was happy with it or not. This is something I've wanted to do for game development too, but time and skill has been a bit of an issue. At this point, I think I am competent enough as a coder to give it a shot. This week is still a little busy, but as it winds down, I will get started on my first game. I'll aim to incorporate what I do back into Gladiotron through the interactive comic that I will be creating here as well. Lots of growing ahead.

So you don't have to just look at a wall of text. here is some older concept sketches for some of the environments in the game. 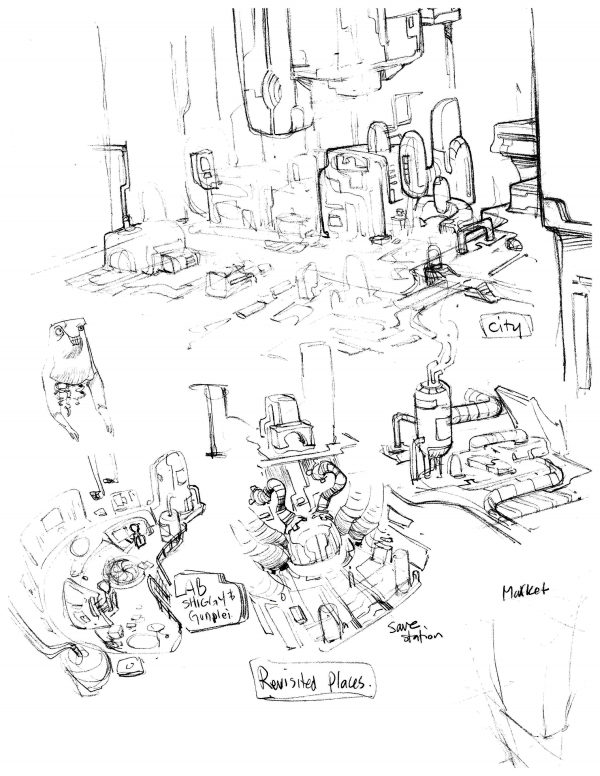